See, I have given You Jericho ( Prophetic) 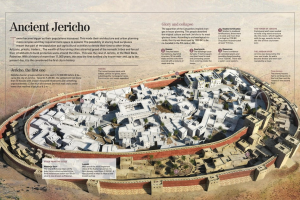 See, I have given Jericho into your hands

And you will have a miraculous manifestation.

See I have given Jericho into your hands

Believe it, confess it, conceive it;

Rise and go for it and you will have it .

There are more with you than are against you

If God be for you, who can be against you?

Is there anything too hard for me?

Have I not commanded you?

Be strong and be of a good courage.

For the Lord your God is with you wherever you go.

The battle is not your s but mine.

But you have to go against them.

That is your part to play.

Pay the price and you will have the prize.

Refuse to be intimidated by the giants

Don’t look at their faces

when He set He set His face like a flint towards Jerusalem.

When he refuse to budge in the face of opposition.

Be bold like David who ran towards Goliath with his sling and stone- his God given talent and equipment.

You also have something your hands and in your house and deposited in you.

Use what I have given you, because it is sufficient to bring down the Goliath that you see.

Like David, pursue, overtake and you will doubtless recover all.

Like the four lepers, advance into the territory that seems a waterloo. You will not die but live to declare the praise and glory of God. Arise and go into the city and you will find bread.

Esther was bold to approach the King for the lives of her people. She risked her life and God granted her favour with the King who extended the sceptre of deliverance to her.

Step out in faith and you will not be denied. The just shall live by faith.

Like Paul, forget the past disappointments and reach forth to that which is ahead.

Press on for the mark of the prize of the high calling in Christ Jesus and the trophy will be yours. Press on for what is ahead- the Promised Land.

See, I have given you Jericho.