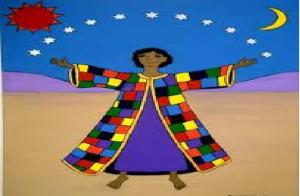 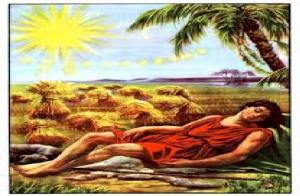 Finish Well like Joseph Who broke the gates of a barren womb and came out; Who dared to dream a big dream. And when his dream was opposed he dared to dream again. Yes, they stole his coat. They could not steal his anointing. Yes, they made him a scape goat but he maintained his blessing. Yes, he was thrown into the pit but he maintained his grit. Yes, he was sold into slavery but he used it as a springboard for prosperity. Wherever he went he prospered. Wherever he went he excelled and so stood before kings and not mere men. And when tempted by Potiphar’s wife, he refused to compromise his purity and his integrity. Yes, he was thrown into prison, yet there he displayed compassion and was selfless and impressed the guard to obtain promotion. This set him in motion for more promotion. And so his Pay Day came

when Pharaoh dreamed a perplexing dream

that only Joseph could interpret. He was summoned.

He went from the prison to the palace;

from prisoner to prime minister. He finished well despite obstacles because God was with him.

Your end shall be greater because of the Greater One on the inside. No weapon fashioned against you shall prosper. You will use every obstacle as a stair to climb up. You will use every adverse wind to mount up and soar like an eagle. What was contrived to make you struggle will birth a miracle.

You shall not lack anything good.

Goodness and mercy will follow you all the days of your life.

God will prepare a banquet for you in the presence of your enemies.

He will anoint your head with oil and your cup will run over.

He has given His angels charge over you. You will not dash your foot against a stone. You will use every valley of Bacca,

every valley of weeping as a springboard for a lift off.

Every set back shall be a set up for a comeback.

Finish well like Joseph. When your dream is opposed, dream again. Put not your trust in man. Put your trust in the Great I Am. Those who put their trust in Him shall never be put to shame.

The presence of the Lord will set you apart.

The presence of the Lord will make a difference.

He who has begun a good work in you

will keep working at it until He brings it

to a glorious fruition; a spectacular, miraculous finale.

4 So Joseph found favor in his sight , and served him. Then He made him overseer of his house , and all that He had He put under his authority. 5 Now Joseph had a dream , and He told it to his brothers; Gen37 22

And the keeper of the prison committed to Joseph’s hand all the prisoners who were in the prison; whatever they did there , it was his doing. Gen39:4,22 41

And Pharaoh said to Joseph , “See , I have set you over all the land of Egypt.”

42 Then Pharaoh took his signet ring off his hand and put it on Joseph’s hand; and he clothed him in garments of fine linen and put a gold chain around his neck.43 And he had him ride in the second chariot which he had; and they cried out before him, “Bow the knee!” So he set him over all the land of Egypt.44 Pharaoh also said to Joseph, “I am Pharaoh, and without your consent no man may lift his hand or foot in all the land of Egypt.”45 And Pharaoh called Joseph’s name Zaphnath-Paaneah. And he gave him as a wife Asenath, the daughter of Poti-Pherah priest of On. So Joseph went out over all the land of Egypt.Gen41:41-45