The Word of Faith 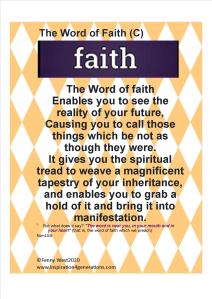 Enables you to see the reality of your future,

Causing you to call those things which be not as though they were.

It gives you the spiritual tread to weave a magnificent tapestry of your inheritance,

and enables you to grab a hold of it and bring it into manifestation.

8 But what does it say? “The word is near you, in your mouth and in your heart” (that is, the word of faith which we preach):

17 (as it is written, “I have made you a father of many nations”) in the presence of Him whom he believed — God, who gives life to the dead and calls those things which do not exist as though they did;
18 who, contrary to hope, in hope believed, so that he became the father of many nations, according to what was spoken, “So shall your descendants be.”
19 And not being weak in faith, he did not consider his own body, already dead (since he was about a hundred years old), and the deadness of Sarah’s womb.
20 He did not waver at the promise of God through unbelief, but was strengthened in faith, giving glory to God,
21 and being fully convinced that what He had promised He was also able to perform.
Rom4:17-21